Y’all. I’m trying to remember my login info so I can stop writing this on my phone. You might not know it, but writing on a cell phone, while it technically works, doesn’t really work. Apparently I exceeded the number of attempts and now am in time out for a bit. But the real question is not, what is the password, the real question is, how are all passwords not saved on all devices at all times? “They” really expect adults who write entire blogs about hangovers to remember passwords? My brain is too full of Alanis Morissette lyrics to also hold passwords.

Anyway, it’s been like a month. I know, I’m the worst. But what a month it has been! (Also, I know it’s only been about 2 weeks, typing on a phone makes it seem like a lot longer.) Way back at the end of January I went to Florida to hang out with my sister, check on my sweet house, and experience my first ever Gasparilla. For a little back story, Jose Gaspar may or may not have been a real human pirate, nicknamed Gasparilla, who plundered the Caribbean near Florida. And so obviously once a year, everyone in Tampa has to get really drunk in order to welcome Gaspar back, or to make him believe we are all already pirates and so he can move along without pillaging. I heard different accounts from everyone I asked, and the Internet is also delightfully vague. I decided it was drunk Passover, and instead of lambs blood on the door, it’s pirate clothes and Jell-O shots! 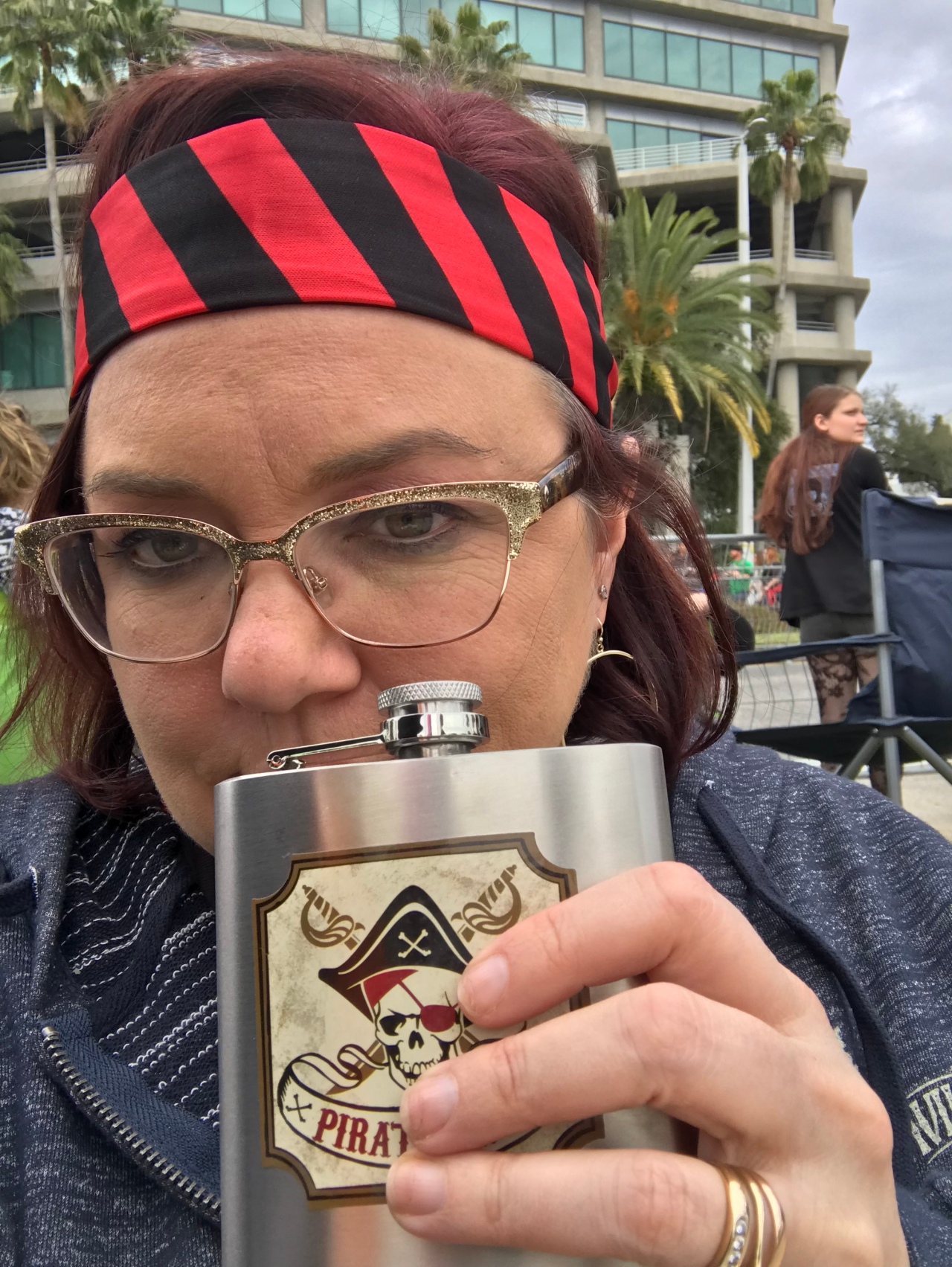 Whatever your personal philosophy is, it’s a great time, and worth going to at least once. We were able to be on the water side of the road, where it was not crowded, though the bathroom lines were still long. The only issue was that on the not crowded side, there was also no alcohol. So once flasky Mc rum was empty, I was SOL. You know how on TV, one person brings a flask to a wedding and everyone is somehow drunk? That’s not real. A flask is like 4 ounces of liquid. If it were a toddler wedding, MAYBE, but for me, not so much. There were also dozens of Jell-O shots, but I feel like those don’t really count. Either way, my hearty crew left heavy with beads, but sober, and hungry. 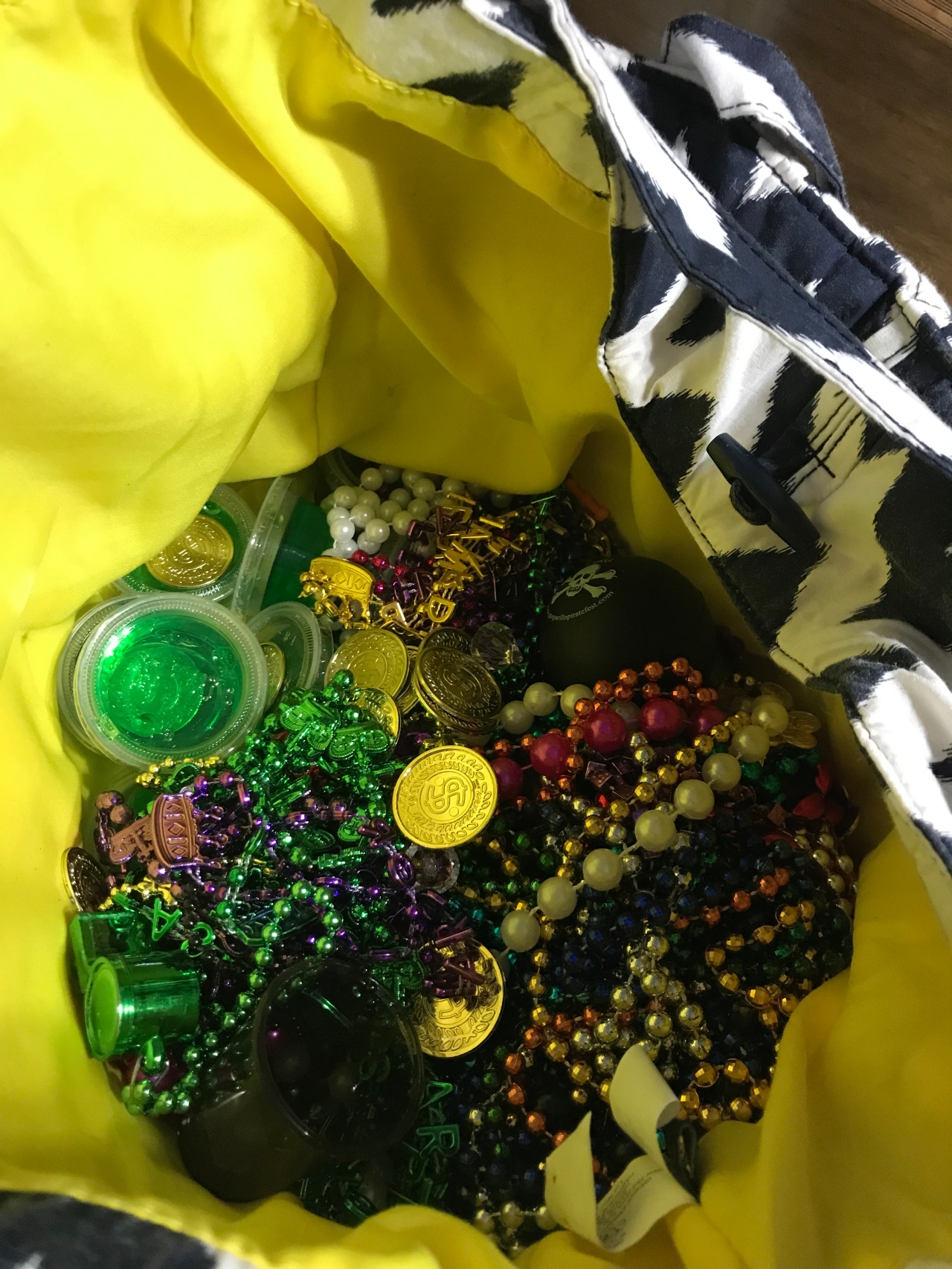 I hope to bring Brian with me next time I go, and hole up with a cooler, or near a beer stand. If you have never been and are interested, you can bring coolers, flasks, handles, a keg… it’s a lawless free for all. Which is pretty fantastic. There are also concerts and brunches. I feel like I just scratched the surface this time, and really look forward to living there full time one day so we can really experience it. Hopefully that day will come before the powers that be reign it in and make it all sober and wristband check points and IDs. Which brings me to my next blog. Thanks for reading this not at all hungover hangover blog me hearty drunkies. I may be calming down a little bit this year, but then again, I may have been so hungover that I puked on a car dealership 2 days ago. You’ll have to wait and see.